The way you deploy and run Alfresco Community Edition has changed significantly since version 6.0. Traditionally, you'd download an installer that installed Java, Tomcat, Database, WARs, tools, etc. and everything was configured to work together out-of-the-box. Then you'd use a script to start things off. That's no longer the case and there are no installers available. We'll be working with Docker containers instead.

You can start Alfresco Community Edition from a number of Docker images. These images are available in the Docker Hub and Quay repositories. However, starting individual Docker containers based on these images, and configuring them to work together might not be the most productive way to get up and running. To make things easier, and achieve a single-step deploy and run solution, a Docker Compose file is available to quickly start Alfresco Community Edition when you need to test something or work on a proof-of-concept (PoC).

There are also Helm charts available to deploy Alfresco Community Edition in a Kubernetes cluster, for example, on Amazon Web Services (AWS). These charts are a deployment template which can be used as the basis for your specific deployment needs. The Helm charts are undergoing continual development and improvement and should not be used 'as-is' for a production deployment, but should help you save time and effort deploying Alfresco Community Edition for your organization. 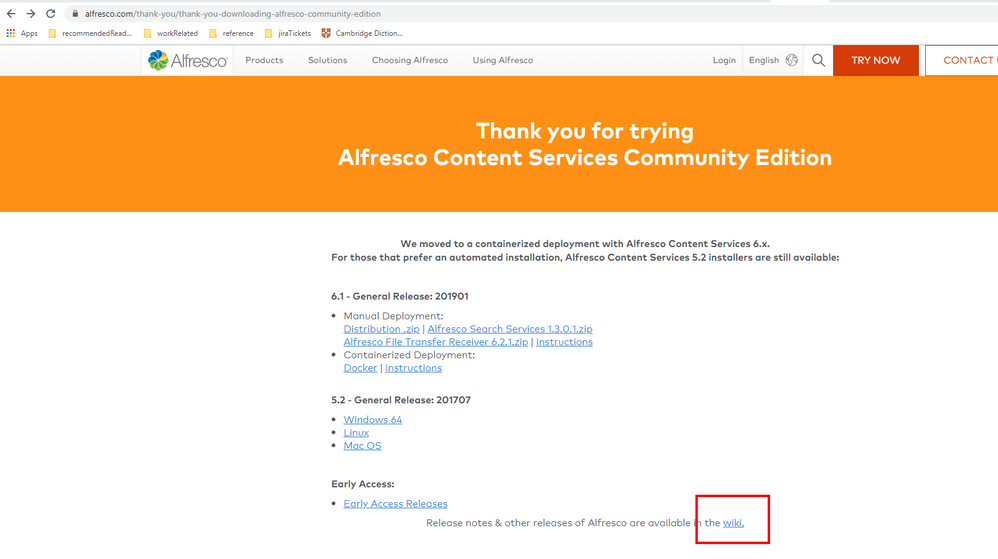 The following is a list of concepts and technologies that you'll need to understand as part of deploying and using Alfresco Community Edition. If you know all about Docker, then you can skip this part.

A Hypervisor is used to run other OS instances on your local host machine. Typically it's used to run a different OS on your machine, such as Windows on a Mac. When you run another OS on your host it is called a guest OS, and it runs in a Virtual Machine (VM).

An image is a number of layers that can be used to instantiate a container. This could be, for example, Java and Apache Tomcat. You can find all kinds of Docker images on the public repository Docker Hub. There are also private image repositories (for things like commercial enterprise images), such as the one Alfresco uses called Quay.

Docker is one of the most popular container platforms. Docker provides functionality for deploying and running applications in containers based on images.

When you have many containers making up your solution, such as with Alfresco Community Edition, and you need to configure each individual container so that they all work well together, then you need a tool for this. Docker Compose is such a tool for defining and running multi-container Docker applications locally. With Compose, you use a YAML file to configure your application's services. Then, with a single command, you create and start all the services from your configuration.

A Dockerfile is a script containing a successive series of instructions, directions, and commands which are run to form a new Docker image. Each command translates to a new layer in the image, forming the end product. The Dockerfile replaces the process of doing everything manually and repeatedly. When a Dockerfile finishes building, the end result is a new image, which you can use to start a new Docker container.

Difference between containers and virtual machines

It's important to understand the difference between using containers and using VMs. Here's a picture from What is a Container Docker:

The main difference is that when you run a container, you are not starting a complete new OS instance. This makes containers much more lightweight and quicker to start. A container also takes up much less space on your hard-disk as it doesn't have to ship the whole OS.