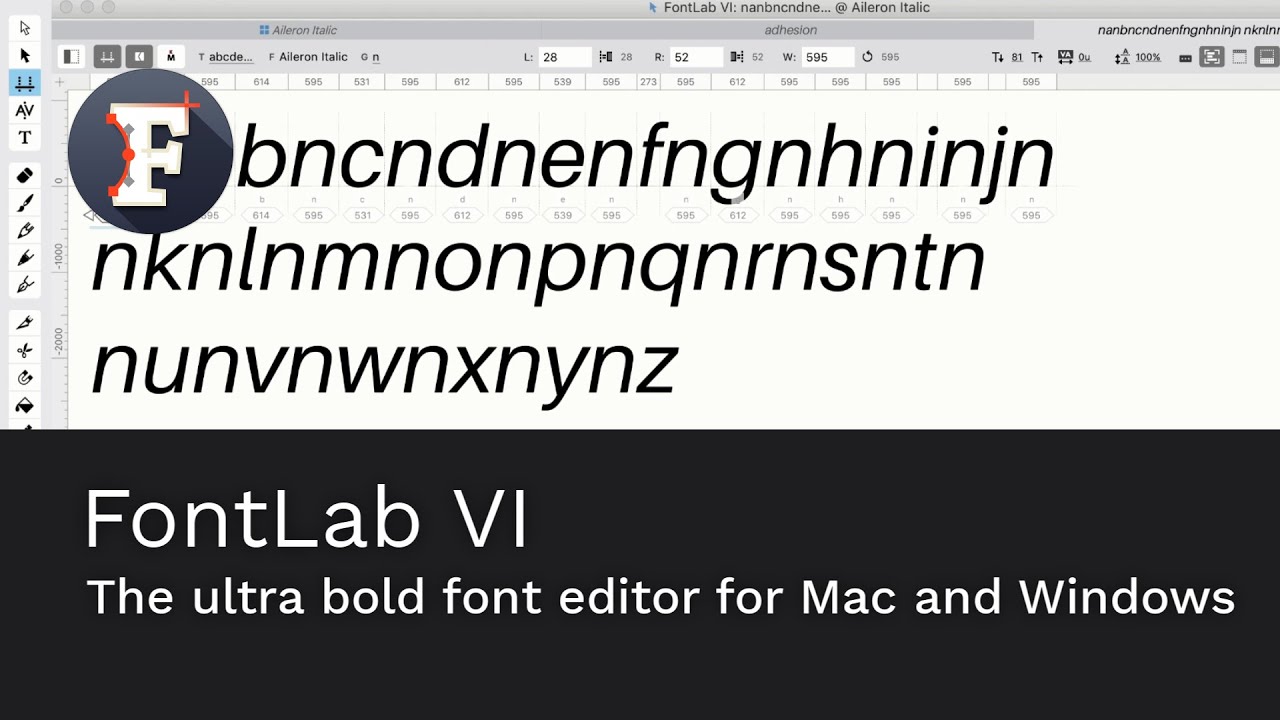 Originally developed by the same team as the drawing program Freehand, Fontographer (or “FOG”) was the first software product on the Mac ever to include Bézier drawing tools, and is still famous for its clean, robust and easy-to-use user interface.

Draw curves with the classic Bézier Pen tool or use the Curve, Corner, Tangent, Arc tools to build your outline step-by-step. Draw geometric shapes with the Rectangle or Polygon tools (including stars and rounded corners), and with the Ellipse tool. Draw calligraphic strokes with the pressure-sensitive Calligraphy Pen.

Add nodes and slice through segments with Knife. Remove nodes manually with Merge Points and automatically with Clean Up Paths while keeping the shapes of the curves. Turn on Auto Curvature to keep nodes extra-smooth.

‍Scale, Rotate, Slant losslessly thanks to the fractional precision, Align Points to Grid to snap the points to preview the final font outlines in integer coordinates.

Draw on the Outline layer. Place curves and bitmaps into the Template layer for reference. Turn template bitmaps into outlines with precise Auto Trace. Measure distances with the Measurement tool, and use arbitrary vector shapes as guides in the Guidelines layer.

Fontographer (FOG) is a font editor for Windows and OS X; it is used to create digital fonts. It was originally developed by Altsys but is now owned by FontLab Ltd.

In December 1984, James R. Von Ehr II founded the Altsys Corporation to develop graphics applications for personal computers. The first foray by Altsys into commercial font editing software was a bitmap font editor called Fontastic, released in the mid-1980s for the Apple Macintosh. The program, developed by Altsys founder Von Ehr, was able to edit the native bitmap font format of the Mac. It introduced many of the interface elements that would carry over into Fontographer. Fontastic Plus was later introduced with new editing tools and kerning pairs.[3]

Fontographer, developed by von Ehr for the Mac and released in January 1986 —before Adobe Illustrator— was the first commercially available Bézier curve editing software for a personal computer.[3][4] High quality fonts in the PostScript format could be developed for a fraction of the cost of all other existing methods (URW's Ikarus required systems costing over $100,000[5]), leading to what has been called 'the democratization of type design':[6][7][8] for the first time in history, numerous self-taught type designers without substantial capital investment produced fonts for professional use. Fontographer 2.0 was released eight months later in the Fall of 1986.

With the PostScript background established with Fontographer, Altsys developed FreeHand in 1988 as a Macintosh Postscript-based illustration program using Bézier curves for drawing and editing. In 1989, Fontographer 3.0 was released, featuring an auto-trace tool and automatic generation of hints for Postscript printer fonts.[3][9]

In January 1995 Altsys was acquired by Macromedia and both Fontographer and FreeHand were incorporated into the Macromedia product lineup.[10] A new version of Fontographer was included in the Macromedia Graphics Suite, which helped its wider adoption. Although development of the font editor was frozen from 1991, when version 4.1 was released,[11] until 2006, many font and graphics designers continued to use it. The only serious competitor at the time, FontLab (later FontLab Studio), was generally considered more difficult to use, although by 2005 it had overwhelmingly replaced Fontographer for most professional font development.

In May 2005, FontLab Ltd. announced that they had licensed distribution rights from Macromedia, and resumed development. They are currently selling Fontographer along with their other products. In December 2005 FontLab shipped a new version of Fontographer for Mac OS, running natively on OS X and featuring numerous bug fixes. They have since exercised their option to buy all rights to Fontographer, so it is now fully owned by FontLab Ltd.

In June 2010, Fontographer version 5.0 was released by FontLab.[12] This represents the first major features added to the product since 1996. FontLab has positioned the product as an easier-to-use alternative to FontLab Studio, though without as many of the high-end features needed by professional type designers, and given it a price intermediate between FontLab Studio and their more introductory font editing program TypeTool. In the summer of 2011, Fontlab released Fontographer 5.1.[13] The latest version of Fontographer (5.2) is still a 32-bit application, and the Mac version is not expected to run on the upcoming macOS 10.15 (the next full macOS to be released after Mojave, expected in fall 2019).